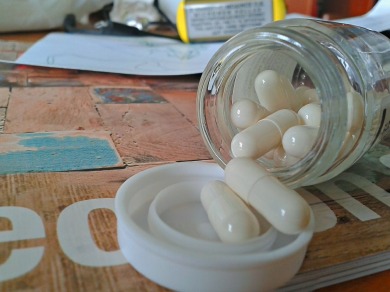 First, I would like to thank those who liked my article on my battle of being bi-polar and my battel with depression.

I have decided for this article not to use any Scripture for I cannot think of one that would be appropriate for this topic.

In around 1987 I was a passenger on the back of a motorcycle.  The driver and I both worked at the same factory and also lived in the same little town.  We were on our way home in the month of August travelling on the major highway, the 401.  I am not sure where the driver’s attention was, but, he ran directly into the back of another vehicle.  The impact sent me air bound and I landed on my rear.  When I hit the pavement it tore away the muscles and such from my spine.  The next morning in the hospital I learned what the doctors thought about my injury to my back.  The nurse that came in that morning reacted to me moving around and dropped the tray she was carrying.  I asked why that happened.  She proceeded to tell me about the report that was given.  They were told I would be a quadriplegic.  After about a week and some therapy I was released from the hospital.

That was the beginning of a thirty year plus battle with opioids.  It started with minor pain relievers eventually in around 2004 I was taking the highest dose of oxy allowed here in the province I live in.  On top of that I was given fentanyl patch.  Now let me say I cannot recall if I was using both at the same time or separately.

The oxy started on a journey I wouldn’t wish on anyone.  I was going through some weird things.  My best friend would tell me about a conversation we had, but, I would not have any recollection of it.  He would come over in the mornings and find me in the weirdest places.  Once laying under my sewing machines.  I would wake up in the mornings and would have to look in my kitchen sink trying to figure out what I ate the day before.  This continued for the longest time.  The problem was I wouldn’t remember taking an oxy, so, I would take another one.  I was double dosing.  In Canada and the province I live in you cannot double doctor, or, have a prescription filled several times by going to different pharmacies.

Finally, I followed my best friend’s advice and spoke to the psychiatrist and I said I wanted off these heavy meds.  The psychiatrist, family doctor, my friend and myself came together with a plan.  On my request I asked to be admitted because I truly felt it would be the best place.  Also, the plan included that I would no longer have control of any of my prescriptions.  They would be handled by my best friend.  Today, I am totally free from the opiods.  The strongest pain killer I take now is Tylenol 3, those also are managed by my friend.  This is going on now to be fifteen years.

What kept me on track was all involved helped me by encouragement.  I had some truly rough times for about a year.  Here is the problem with opioids.  They are given for pain for a short time.  My new family doctor, my current one at the time was retiring, told me about these pain killers that when you are on them for longer periods of time, they quit relieving pain and start doing the very opposite.  It becomes like a never ending circle.

My best friend never once tried to shame me about my issue.  That is the key.  If you know someone who is addicted to any opioids do them a favor and do not try shaming the person.  This will only cause them to shut down and keep out you and everyone else including the professionals who needs them to be honest and open about what they are experiencing.  Sometimes, they don’t need for you to speak, it may be that what they need more than anything is a sympathetic ear.

If you are a pastor there are probably some in the congregation that are battling these opioids but are suffering in silence.  Please, get educated about this terrible epidemic in North America.

I am aware of most in the United States the costs of being hospitalized is a factor.  Many probably do not have coverage. Let me be honest, I do not understand the system in America, so I really cannot comment.

I pray that if you are reading this and are going through your own battle, do not keep it to yourself.  Talk to someone you trust, call a help line, and most definately seek professional help.  Do not feel shame about your issue with opioids.